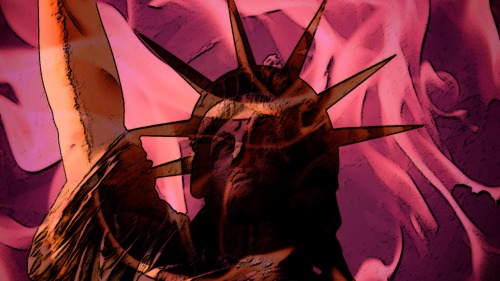 Recently news outlets across the country have been lighting up like a Christmas tree with stories of  beloved family and community members facing deportation (see here and here for just a couple examples). This, along with items like the Muslim travel ban, have led to widespread rebuke among progressives in the United States – with some even invoking Hitler. While cries of internment camps and extermination orders may seem outrageous and hysterical, it’s important to look back on history to see just how far-fetched these ideas are.

While antisemitism was already brewing in Europe during the 1930s, an economic crisis brought it boiling over. In Germany – with concerns about poverty, inflation and unemployment – antisemitic groups such as the Nazi Party found an ideal scapegoat in Jews. Once the Nazi Party came to power in 1933, the true, horrifying scope of their antisemitic agenda revealed itself slowly over the course of a decade.

Legislation restricting places Jews could work at was the first to come. After that came restrictions on the political rights of Jews. Then came segregation laws, which forbid Jews from doing various things in the public sphere while outlawing Jewish culture and materials made by Jews. Finally, laws requiring Jews to register their property, change their names to be more easily identifiable, carry special passports, and otherwise make themselves identifiable as Jews were passed.

The first mass slaying of Jews happened in 1938 when the paramilitary wing of the Nazi Party clashed with Jews, resulting in 91 Jewish deaths, damage to hundreds of Jewish businesses and synagogues, and 300,000 Jews being placed in internment camps. In 1941, mass killings of Jews became commonplace and in 1942, nearly 10 years after the Nazi Party’s rise to power, the “final solution” to transport all Jews to concentration camps for extermination was proposed and implemented.

In the 1830s a new religious movement formed in the United States: Mormonism. Mormons were seen as peculiar at best and sinister at worst. Among other things, there were concerns about Mormon religious beliefs, their loyalty to their prophet, and their growing numbers. These fears eventually led to persecution and clashes between Mormons and other Americans – and eventually led to government actions (including an extermination order) that forced Mormons to flee from the United States to the relative safety of what is now Utah in the 1840s.

Even then, concerns about Mormons did not end. In 1879, President Hayes told U.S. diplomats to seek help from European governments to keep Mormon converts from travelling to the U.S. Later, in 1883, President Cleveland asked Congress to ban Mormon entry into the United States – essentially instigating a Mormon version of Trump’s Muslim travel ban.

Rhetoric today surrounding refugees, immigrants and Muslims is largely the same as it was for Jews and Mormons during these two time periods: There are concerns about increased crime and terrorism, growing movements, and worries about American jobs being taken. But, just as with the Mormons and Jews, these fears are overblown or completely unfounded.

Statistics show that undocumented immigrants commit less crime proportionally than U.S. citizens. Similarly, people are more likely to be killed by a white supremacist or anti-government fanatic than be killed by an Islamic terrorist. As for jobs, statistics show that the presence of undocumented immigrants actually raises wages for U.S. citizens and creates nearly as many jobs as they occupy (maybe even more). On top of this, illegal immigrants pay into our tax system without being able to reap most of the benefits.

Generally one of the most prevailing themes in stories about undocumented immigrants being deported or Muslims being arrested and held at airports is how much they are valued (and needed) in their community. Right now, we are tearing away people who are clearly productive and contributing members of our society. We are tearing them away from their families, neighborhoods, churches and colleagues – leaving only a painful gap with absolutely no discernible benefits.

It wasn’t right in the 1800s and 1900s and it’s not right today. And while there haven’t been any extermination orders yet, if we don’t realize we’re heading down the same dark path we’ve been down before, it can easily happen again. As history has shown us, everything always starts small – but all it takes for small atrocities to snowball into large massacres is the silence of good people.